NEW DELHI: Google has released its monthly
Android distribution statistics for September 2016. According to the company, Android Marshmallow 6.0 is slowly expanding to more number of handsets and sits at an 18.7% now. Android Nougat 7.0 is yet to make it to the chart.

Although a significant increase, Android Marshmallow still lies below Android Lollipop, and Kitkat on the list. As per the latest distribution numbers, Android Lollipop 5.0 and v5.1 together run on 35% Android devices, followed by Android Kitkat 4.4 with a 27.7% share.

Android Jelly Bean on the other hand, powers 15.6% devices, while Android Ice Cream Sandwich, Gingerbread, and Froyo are placed at 1.4%, 1.5% and 0.1% respectively. These numbers were gathered by Google from Android devices accessing Google Play Store within a seven-day period till September 5. 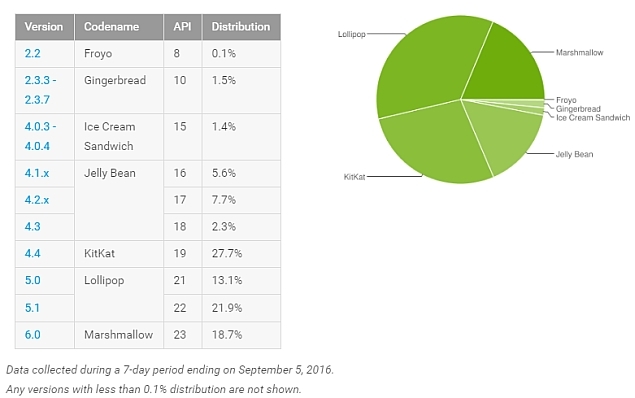 A few days ago, Google started rolling out
Android 7.0 Nougat to Android One devices. The version was rolled out through the OTA channel. Cherry Mobile G1 was the first Android One smartphone to have received the update.

The Android 7.0 Nougat update for Nexus 6P was on hold for sometime following reports of it draining the handset’s battery faster than expected. The issue, however, was attributed to a glitch at Huawei’s end. Google recently released factory and OTA images for the Nexus 6P and has resumed rolling the update out.