Birla Corporation Limited, flagship Company of the MP Birla group announced its financial results for the quarter and financial year that ended on 31 March 2019.
This has been a year of consolidation and all-round improvement in performance. The March quarter EBIDTA grew by 15 per cent to Rs. 333.95 Cr (Rs 290.09 Cr the previous year) on the back of growth in sales and better realisation. The full-year EBIDTA at Rs 1,027.08 Cr was 18 per cent higher than the previous year. Cash profit for the full year jumped by 33 per cent to Rs. 657 Cr and net profit was up by 66 per cent over the previous year at Rs. 256 Cr.

Volume growth for the March quarter was at 13 per cent and 10 per cent for the full year, which combined with a sharp increase in the sale of premium products and blended cement in the portfolio. In the quarter till March, blended cement contributed to 92 per cent of the company’s sales by volume.

The share of trade (channel) sales has now crossed 80 per cent of the Company’s total sales volumes of which premium products account for 38 per cent.
MP Birla Cement is now a co-leader in the fast-growing Central India markets and Bihar in the east – with a strong brand-folio straddling across different price segments. MP Birla Cement’s flagship premium cement brand, Perfect Plus, launched after the acquisition of the RCCPL units, has now been extended to other geographies where the company has a marketing footprint, namely North and East.

The company’s production units are now operating at more than 90 per cent of their installed capacity. The benefits and synergies of RCCPL acquisition have now been fully assimilated. The newly acquired RCCPL plants have one of the best efficiency parameters in the industry.

The company’s obsessive focus on cost rationalisation continues unabated. Increase in fuel prices have been partially off-set by improving energy-usage efficiencies in plants and economical sourcing of other raw materials such as fly-ash &amp; gypsum and relentless focus on lowering logistics costs for both inward and outward movement.

A significant achievement of the quarter has been a turnaround in the performance of the Chanderia unit, despite low prices prevailing in the North markets throughout the year by a series of cost reduction measures and marketing initiatives. The Chanderia unit has systematically enhanced its capability of mechanical mining, thereby reducing dependence on purchased limestone, which has resulted in significant savings in the cost of production.
As a part of “co-branding” initiatives, the premium brands MP Birla Cement Perfect Plus and MP Birla Cement Ultimate are being manufactured at Chanderia for the North markets, Western MP, Gujarat and Western Uttar Pradesh. This had a notable positive impact on the unit’s profitability.

Consistent with the company’s “Cement se Ghar tak” strategy of focussing on the “individual home builder” in the value-adding retail segment, there has been a thrust on increasing the share of “eco-friendly” blended cement.

Substantial investments in brands, increasing the depth, width and quality of distribution assets, high focus on technical support for customers, deepening channel relationships and influencers connect have started showing results. This is visible in brand salience, product placement and availability at outlets and, above all, improvement in price positioning.
In addition to the company’s highly appreciated CRM Initiative for Channel Partners – “Club Ultimate”, last year MP Birla Cement launched an App-based programme – Aarman-Nirman – for influencers and retailers. Within a short time, more than 1,00,000 masons, contractors and engineers have come on board with whom the company now has direct communication links. This is already showing results in increasing recommendation scores for MP Birla cement brands.

During the quarter, the work for laying permanent rail tracks and mechanical wagon loading facilities for dispatches was commissioned at Kundanganj. This has significantly enhanced the evacuation capabilities of the plant, which will contribute both by reduction in logistics cost and increasing market reach.
Work in progress
All the expansion projects of the Company are progressing as scheduled.
A new integrated factory, with an annual production capacity of 3.9 million tons, is being built at Mukutban, near Nagpur, in Yavatmal district of Maharashtra. The factory along with a 40-MW captive power plant is estimated to cost Rs 2,450 Cr. Looking at the progress so far, the company expects to start the factory in 2021-22, as planned.
Birla Corporation Limited is expanding the capacity of its Kundanganj plant by 1.2 million tons. The project is expected to be concluded in 2020-21. During the March quarter, the company started railway despatches from the Kundanganj plant. Rail connectivity will help ramp up despatches from the plant, reduce cost of delivery and expand the market served by it.

A 12.25-MW Waste Heat Recovery System (WHRS) is going to be commissioned at Maihar in the current quarter. Three solar power plants – one each at Maihar, Chanderia and Satna – are to be installed in the September quarter.
The company has been steadily ramping up production at its Sial Ghogri coal mine in Madhya Pradesh. The production is expected to go up to the optimum level in the next financial year.
Completion of these projects will lead to substantial increase in the operating profits of the company.
Our test marking initiatives with construction chemicals and wall putty have delivered encouraging results and we shall roll them out in new geographies.
As a strategy, Birla Corporation will continue to focus on individual home buyers, providing them with quality construction materials and support services, to further increase realisation and sale of its premium brands.
Jute Division
Amid difficult market conditions and escalating cost pressure, Birla Corporation Limited’s Jute Division turned in an EBIDTA of Rs 20.2 Cr for the full year, against Rs 28.63 Cr the previous year. Production during the year increased to 37,308 tons (37,208 tons). The Company exported jute goods worth Rs 29.44 Cr during the year (Rs 48.81 Cr). 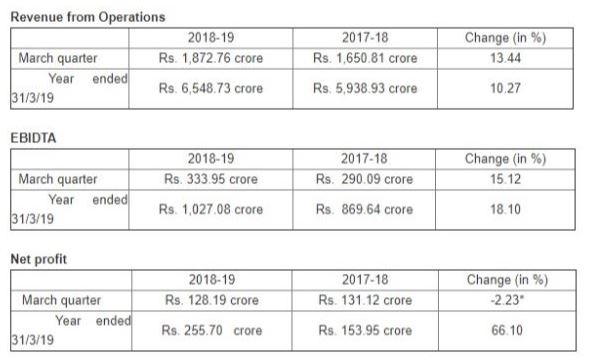 Net profit for the March quarter FY18-19 grew by 11% year-on-year after adjusting for one-off deferred tax credit in the corresponding period of the previous year.

The Board of directors has declared a dividend of Rs 7.50 per share (Rs 6.50).
Outlook
With mega infrastructure projects gaining momentum and the real estate sector showing signs of revival, the company expects cement demand to remain buoyant. Due to continuing focus on rural and affordable housing, as also initiatives such as smart cities, the management expects favourable market conditions going forward.
This story is provided by NewsVoir. ANI will not be responsible in any way for the content of this article.

CII to support initiatives for investment in Jammu and Kashmir

Aamir Khan’s special message for his fans this election season!