Washington D.C. [USA], May 3 (ANI): After zestfully hosting the Billboard Music Awards 2019, singer Kelly Clarkson underwent an appendix surgery hours after the event.
The 37-year old performed her latest song ‘Broken and Beautiful’ amid the appendicitis pain, reported Billboard.
Actor-director, Jarett Wieselman first shared about Kelly’s appendicitis. Kelly then took to Twitter to express her gratitude and confirmed that she is fine now.
“Not gonna lie…. I may or may not have broken down in tears after the show from pain. BUT thanks 2 all the amazing people Cedars-Sinai I flew home directly after the event, nailed the surgery early this morning, & feeling awesome now! Bye bye appendix,” she tweeted. 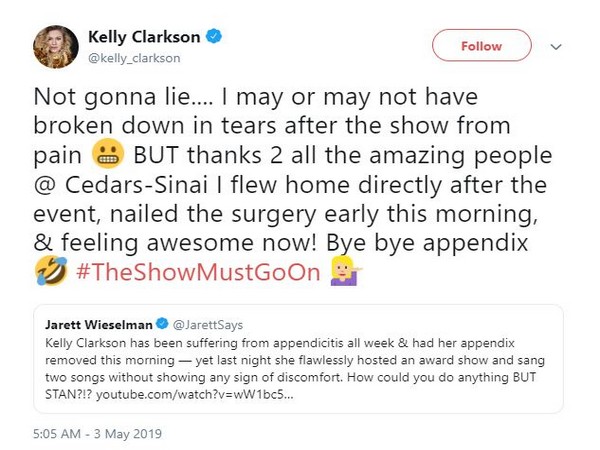 Clarkson hosted the 2019 Billboard Music Awards and opened the ceremony with some of the year’s biggest charts including Florida Georgia Line’s ‘Meant to Be’, Ella Mai’s ‘Boo’d Up’, Maroon 5’s ‘Girls Like You’.
Prior to this year’s awards, Kelly had also hosted 2018 Billboard Music Awards. (ANI)

‘As a producer we want to release the film at the right time where...