Prayagraj (Uttar Pradesh) [India], Mar 4 (ANI): On the occasion of Mahashivratri and culmination of the Ardh Kumbh Mela, the makers of Ranbir Kapoor and Alia Bhatt-starrer ‘Brahmastra’ unveiled the logo of the film here on Monday.
The actors of the film had earlier shared cryptic messages piquing the curiosity of their fans by revealing that they have something special planned for today.
Karan Johar is producing the film under his Dharma Productions banner, which also shared a picture from the event.
“A start of something new, a magical journey unravels with the logo reveal of #Brahmastra at #Kumbh2019! 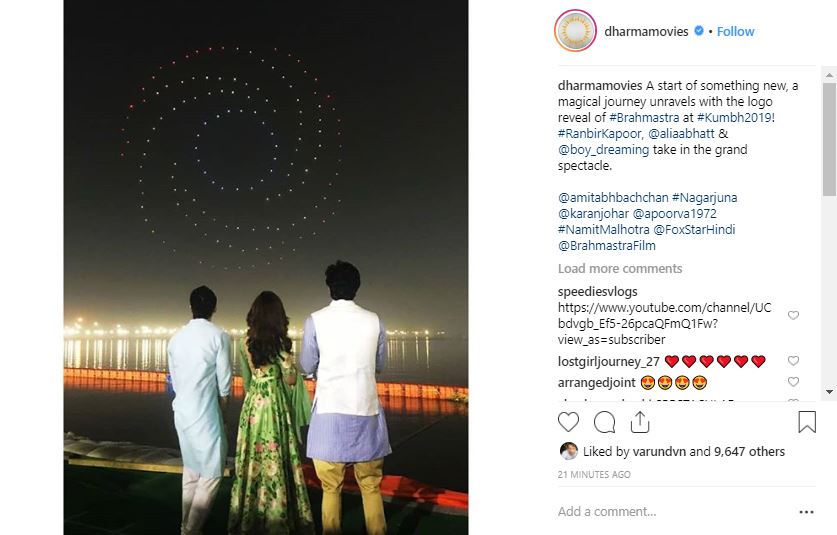 In a live video on Alia’s Instagram handle, the actor showed how 150 drones lit up the sky to form the logo of ‘Brahmastra’. They also paid a tribute to Kumbh Mela with a formation of the same in the sky.
The director of the film, Ayan Mukerji, also shared a still of Ranbir and Alia from the event introducing their character’s names as Shiva and Isha. He wrote, “Shiva & Isha…#brahmastra.”

Ahead of the logo’s release, Dharma Productions had shared a video of Ranbir and Alia at the Kumbh Mela, sharing updates about their project.
“Today is Brahmastra logo day. Our journey has just begun and we are super excited,” Alia said in the video.
Ayan Mukherji, who recently made his Instagram debut, also posted an unseen picture from the film which features cartoon versions of Ranbir and Alia.
‘Brahmastra’ has been extensively shot in Bulgaria, New York and Mumbai, among other places.
Apart from Ranbir and Alia, the film also stars Amitabh Bachchan, Mouni Roy and Tollywood actor Nagarjuna.
‘Brahmastra’ is first part of a sci-fi trilogy which has been created by Ayan. It is slated to release around Christmas this year. (ANI)