New Delhi [India], Mar 08 (ANI):  Celebrating the spirit of Women, filmmaker Karan Johar is unveiling the look of female characters from his upcoming multi-starrer ‘Kalank’. After sharing the look of Alia’s character early this morning, Karan has now unveiled that of Sonakshi Sinha from the film.
With vermillion and a red bindi on her forehead and sporting an intense look, Sonakshi’s character appears to be elegant and strongminded. She is, as Alia describes her, “The one who holds the family together.” 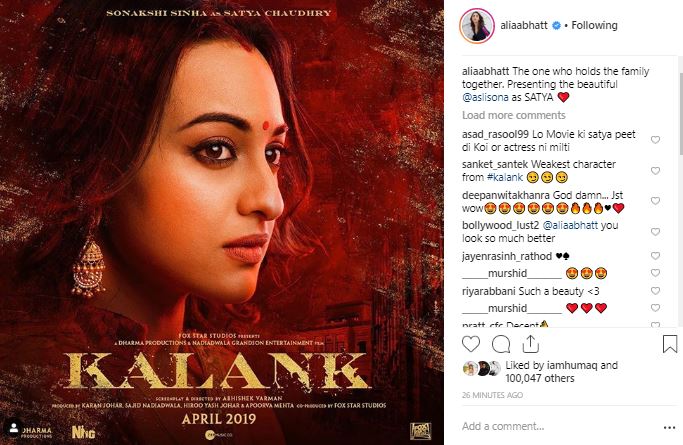 Taking to his Instagram account, Karan posted character posters of Sonakshi and wrote, “She is pure, elegant and filled with love. Here’s Satya.”
Earlier today, Karan shared the first look of Alia’s character and captioned it as “To love her is to love fire. Presenting Roop!”
Donning traditional Indian attire with an elegant veil , Alia looks effortlessly regal as an Indian bride, and we can’t take our eyes off her.
“To love her is to love fire. Presenting Roop,” Johar wrote sharing Alia’s look on his Instagram page.
On Thursday, Karan treated his fans by unveiling the looks of his male lead actors including Sanjay Dutt, Aditya Roy Kapoor and Varun Dhawan.
Makers of the highly anticipated film are successfully keeping the audience on their toes by unveiling the character posters one after another, leaving the fans asking for more.
Kalank is one of Karan’s most anticipated films of all times, considering its star-studded cast, which includes Varun Dhawan, Alia Bhatt, Madhuri Dixit, Sanjay Dutt, Sonakshi Sinha and Aditya Roy Kapur.
While all the other characters posters have been revealed, fans are still eagerly waiting for Madhuri Dixit’s look from the film.
Karan on Wednesday shared an emotional note along with sharing the first look for his upcoming production ‘Kalank’ as well.
He tweeted the same and wrote that Zafar ‘flirts with life and danger.’
The film is set to hit the big screens on April 19. (ANI)