New Delhi [India], Mar 7 (ANI): Sushant Singh Rajput starrer ‘Dil Bechara’ has finally got its release date. It will hit the big screens near you on November 29.
Indian film critic and trade analyst Taran Adarsh took to Twitter to share the news. He wrote, “Release date confirmed… Sushant Singh Rajput and Sanjana Sanghi… #DilBechara to release on 29 Nov 2019… Directed by Mukesh Chhabra… Produced by Fox Star Studios.”
He also shared a picture along with his tweet, which features Sushant alongside the leading lady of the film Sanjana Sanghi. 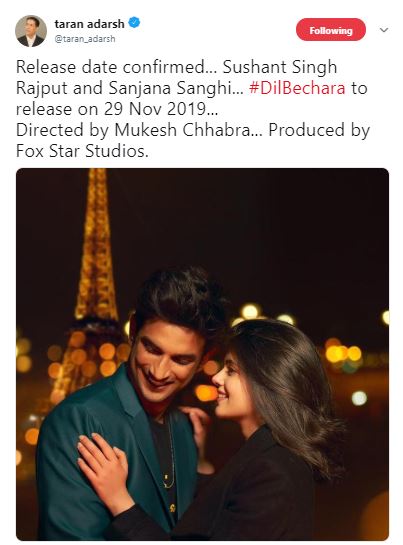 The film was earlier titled as ‘Kizzie Aur Manny’ and is said to be inspired from the popular movie ‘The Fault in Our Stars’.
The upcoming film has been directed by Mukesh Chhabra, who was accused of sexual misconduct during the filming of the movie but was given a clean chit later.
Earlier, in a statement, Fox Star Studios India suspended Mukesh Chhabra from directing his first film in the light of sexual harassment allegations against him.
The official Twitter handle of the production house made the announcement, writing, “As a responsible organisation, Star India takes any allegation of sexual harassment of women at workplace very seriously. Hence, Fox Star Studios has suspended the services of Mukesh Chhabra, director of our film Kizie Aur Manny, which is under production, till the Internal Complaints Committee (ICC) of M/s Mukesh Chhabra Casting Company concludes its inquiry into the allegations against him.”
Sushant will essay the main lead, which was originally essayed by Ansel Elgort in 2014. The film would also see Saif Ali Khan in a cameo appearance.
The film may face tough competition with Ajay Devgn’s ‘Taanaji: The Unsung Warrior’ at the box office which is scheduled to release on November 22, 2019.
Meanwhile, Sushant also has two other movies in his kitty including ‘Drive’ and ‘Chhichhore’. (ANI)