New Delhi [India], Mar 1 (ANI): Actor Swara Bhaskar who is known to speak her mind has slammed comedian Trevor Noah over his insensitive comments on Indo-Pak tensions.
South African comedian Trevor Noah, host of ‘The Daily Show’, during an episode, tried to find humour in the escalating tensions between India and Pakistan.
In the video, being shared widely on social media, Noah said that while he hopes India and Pakistan do not go to war, it would be the “most entertaining” war if they did.
Swara Bhaskar has now taken to Twitter to call out the comedian and tell him that neither is war ‘funny’, nor Hindi ‘gibberish.’ Calling his statement both ‘ignorant & racist’, the actor wrote, “@Trevornoah 1. War isn’t funny or entertaining. 2. Hindi is not gibberish. Ur stereotype of indo- pak is ignorant & racist. 3. Ur set smacks of essentialism & a patronising generalisation & is v #FirstWorld 4. Human lives were lost & at stake. SO disappointing! @ComedyCentral.” 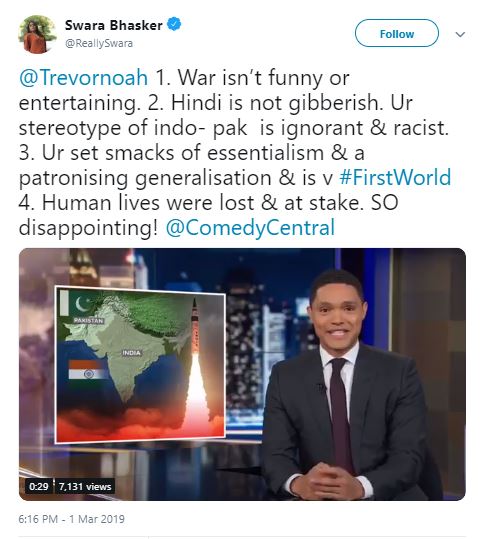 Following recent developments, Bhaskar, in a separate tweet, spoke about India and Pakistan ‘walking back from brink of war’ and further wrote, “@Trevornoah @ComedyCentral a not racist & cruel version of this joke (IF Ur Writers was diverse)- India & Pak thankfully walking back from brink of war. Meanwhile, Bollywood looking to see how many dance numbers they can fit in2 movie version of this episode! Thanks @vedashastri.” 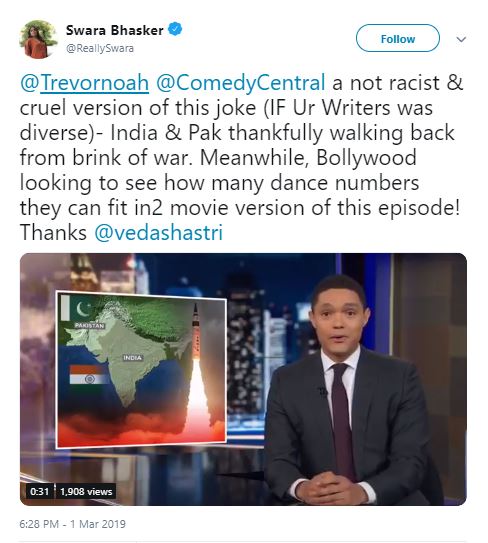 Comedian Mallika Dua too slammed Noah over his remarks and took to Twitter to write, “Shockingly unintelligent & tone deaf What makes it sadder is that @Trevornoah cracked such a below average, shit joke. Something Russel Peters probably threw in the bin before his first open mic in life. If you’re going to be a racist comic than at least get the comic bit right.”
Trevor Noah, however, is not new to controversy. He recently introduced the best picture nominee ‘Black Panther’ at the Oscars and had some fun with the idea that people think the fictional setting of the country of Wakanda is real.
During the segment, Noah joked that growing up as a young boy in Wakanda, he would see T’Challa flying over their village, and he would remind them of a great Xhosa phrase, “abelungu abazi uba ndiyaxoka” — which according to Noah meant, “In times like these, we are stronger when we fight together than when we try to fight apart.”
However, those who know the language realised Noah actually said, “White people don’t know I’m lying.” (ANI)